On our 3rd day there, my husband dryly concludes: There are two different kinds of people in the world: Disney people and non-Disney people. We are not Disney people. I have a girlfriend (actually several, all their names start w M, hmmm) that loves loves loves Disney, she described her latest visit as “absolutely magical, we were so blessed.” My last visit, 17 years ago was magical indeed, but this one, not so much. We barely saw any characters, most staff seemed less than thrilled to be there or was on auto-pilot (i don’t blame them) and the sight of the parks in the evening with trash everywhere, literally used diapers on the street, pulled off gum from the ride seat before my husband sat down, yuck. Plus I’m quite convinced that Walt Disney would be deeply saddened to see how incredibly commercial it has become.

Planning: I used the Magical Castle Vacations, they were pretty good. After I booked with them, they sent us Magic Bands, luggage tags, itinerary and a folder with information for all the parks and rides within. I wish I had the ride descriptions before booking any FastPass rides and book you must otherwise you are spending your entire time waiting in lines. I really wanted to go on Avatar Flight of Passage ride and our agent wasn’t sure 90 days out if she could get it which is crazy. Luckily she managed it. The agent doesn’t cost you anything if you are staying on Disney property which we did.

Hotels: I had heard good things about Yacht Club but being from New England, I wanted some place that had a different vibe. I really liked the photos of Animal Kingdom Lodge but it is kind of out of the way and when we had dinner there, I was glad we didn’t stay. It looks much better on photos than it does in real life. We ended up in Polynesian and you should too if you are into fireworks. More on that below. Hotel was nice, pool had a cool slide but smallish pool, there was another one which was even more shallow. We had a lagoon view room in Hawaii long house which overlooked the beach and we could see Cinderella’s Castle in the distance. Club level lounge was nice, kids could get whatever nibbles they needed, they loved the different tropical juices and while the breakfast choices were all cold, in the afternoon they had really sophisticated options such as pork belly, lamb with pea puree etc and really decent champagne!

Food overall: so-so. I wasn’t blown away by anything but it was good enough. The famous Tonga toast (2 slices of bread stuffed w bananas and fried, then dusted w sugar and cinnamon) was pretty dry but we all loved the Dole Whip (pineapple juice through soft serve) was excellent. Most pool side drinks were SO sweet and SO strong, could manage a few sips before I gave up. Didn’t try the luau or Ohana as they were booked.

Our agent was adamant that it cannot be experienced in one day. Yes, it can. Actually, unless your kids are die hard princess fans which mine were not, get a park hopper pass and do half the day there. We went at rope drop (quick boat ride over from Polynesian, so nice) to Pirates of the Caribbean ride (loved it, the details were amazing, we werent sure if some pirates were dolls or actual people), then FP to Splash Mountain (you will get soaked), then on to Seven Dwarves ride which was closed due to technical difficulties. We booked the girls for pirates&mermaids experience which we had to wait for 40 min despite having a time slot. People there were so good though and really into it, so that made it worth it.

Space Mountain next which I didnt love as its a roller coaster in the dark and bit jerky to be honest.

Back to hotel for lunch and swim, and then to Haunted Mansion which was closed. Tried later, got in, funny ride except it stopped 3x because of the technical difficulties. One of the attendants said something about people getting out of their rides to touch stuff and I was like take them out and shoot them. I mean how stupid are you??? Ugh. Saw the fireworks afterwards and then waited almost 1.5 hrs for monorail, boat would have been quicker. In bed by midnight. Barely saw any characters, they all seem to be partitioned off so get in the ANOTHER line. Should have returned earlier and watched it from the resort’s beach with some bubbly.

Bus from Polynesian, fairly painless, park was packed. We did FP Kilimanjaro Safari which was pretty awesome. We saw so many animals and I really liked our guide, go early though as our friends who rode it later saw almost no animals.

Followed that with FP Expedition Everest which is a massive rollercoaster, our 9 year old enjoyed it so much. Had lunch at Yak&Yeti which is basically Indian-African food whatever that is – ribs, raw tuna, burgers, Korean street tacos. Sadly, while the idea is great, they over season everything! Tried the affection section afterwards, the only thing my 7 year old wanted to do but it was closed till summer. It was 82 degrees, can’t you get some animals in there?! Made no sense. Last but not least we had FP to Avatar: Flight of Passage, the newest ride in Disney. I was super excited but hubs while we were waiting in line was like you know it will be a total disappointment right? 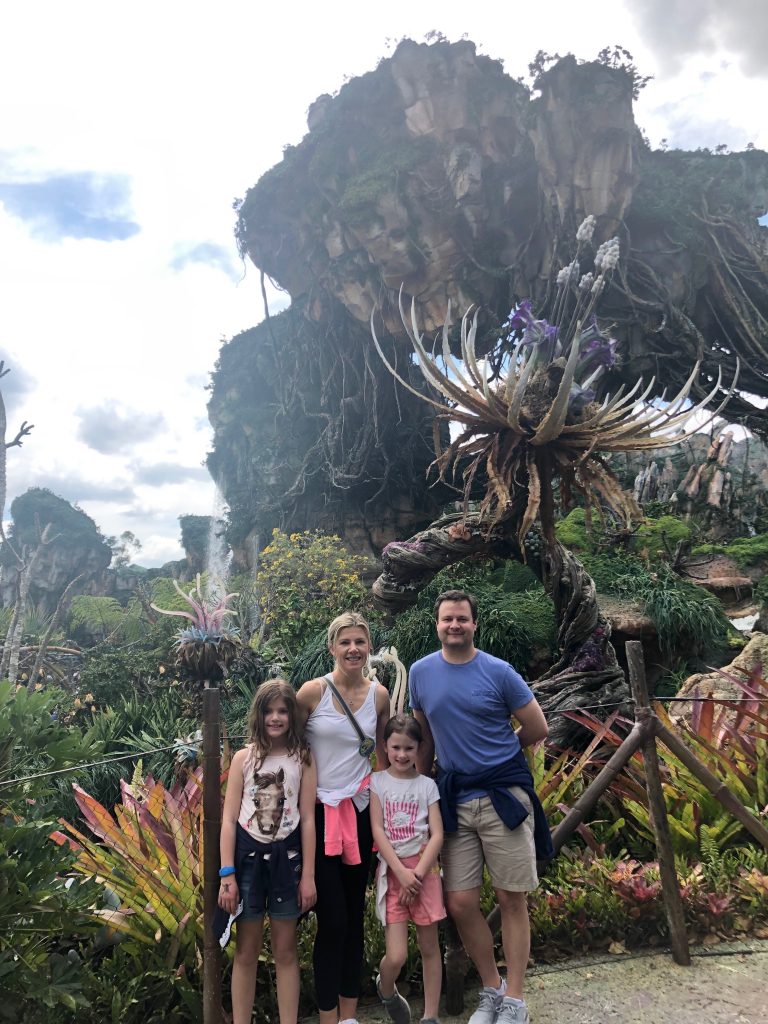 But we were totally totally totally blown away. It’s really hard to describe it, you fly through the ecosystem they show in the movie, on a banshee. It’s completely exhilarating and we were all so bummed when it was over. It was all of our favorite ride and it’s just WOW. We were done by 2 pm.

Rides worth it: Avatar. Kalamanjaro Safari, Expedition Everest. It’s tough to be a bug

Rides not worth it: everything else had a mad line so we skipped it

Back to hotel to rest and swim, off to Sanaa, a restaurant in the Animal Kingdom Lodge. We just Uber’d there and to some parks. Go early so you can see the animals roaming, I liked the bread service but its huge, we had 4 adults and 2 kids and had leftovers. Rice w chicken was pretty dry, meats platter was good and fish (mahi-mahi) on rice was good but little bland.

Epcot has 2 parts: Future East and West and World Showcase. We went to Soarin’ at rope drop, definitely get a FP for that. It was around 45 min wait first thing in the morning. It takes you gliding over the world, pretty fun. Spaceship Earth is def not worth the FP, lines went pretty fast on both sides, very slow ride, boring for kids but we enjoyed it, covers history of communication. Living with the Land was so-so, plastic animals etc but then we drove through an actual greenhouse, I enjoyed seeing different plants (rice, cocoa, dragonfruit etc) and some fish.

We took a boat over to  Morocco, went to Via Napoli and had lunch. There are 3 distinct areas for eating, back by the toilets, middle with large tables and side veranda which is where we sat. We liked the food and service, walked around a bit and then went back to hotel to return in the evening. When I went ages ago, there was so much to do and see, now it seemed as if Epcot was one large bar – alcohol was everywhere and people were drinking pretty seriously. We loved some of the shops, got pastries from France and caramel popcorn from Germany and had a ride from Hell in Norway also knows as Frozen ride which we had a FP for. We sat in front of a lovely family who screamed Let It Go the entire damn time. Ride itself was pretty miserable, story made no sense and it was so jerky. I liked the Mexico’s ride better (no wait also) but thought the water and juice bottles floating around were bit depressing. Had dinner at Le Hacienda as its supposed to have great views of the fireworks but made a family decision to leave earlier so we could get back in time for club level dessert buffet. Saw some fireworks when leaving and caught the tail end of Magic Kingdom’s from our lounge while sipping champagne.

Rides worth it: Soarin’, Spaceship Earth

Rides not worth it: Frozen

So to have a restful vacation, don’t go to Disney. If you must, alternate days in parks and hotel. Plan all your FastPasses for the am, so you are not stressing all day. Stay in a resort w easy access to transportation. Plan your meals. Either stay in the club level or use Whole Foods via Amazon Prime to order some snacks and fruits. Give kids a spending limit so they don’t annoy to death at every store. And Uber early in the day, closer to closing time they really wont come as its too crowded but earlier it makes life so much easier. Have a magical time! (insert evil laughter). But do go for Avatar!